British chef Ollie Clarke has bought the legendary La Régalade in the 14th Arrondissement and is transitioning it towards a new name, Origins 14 – La Régalade. In all likelihood, this will be shortened to Origins 14 once Clarke has settled in, but for the time being, the moniker La Régalade is being retained as a sort of placeholder, because so many people know where this restaurant is located and also that it was the birthplace of la bistronomie, or modern French bistro movement, when chef Yves Camdeborde first opened it in 1992.

Since modern French bistro cooking has become the dominant culinary idiom among ambitious young chefs going out on their own, it’s almost hard to imagine that this cooking style barely existed twenty-five years ago. That was when a band of young chefs who’d worked with chef Christian Constant when he was head chef at the sadly now vanished Les Ambassadeurs at the Hotel de Crillon began going out on their own and applying the haute-cusiine lessons they’d learned from Constant to bistro cooking.

This included the idea of using luxury foods liked foie gras and truffles as garnishes on bistro dishes, shorter cooking times, a lavish use of fresh herbs, and a preference for jus (deeply reduced meat or seafood stock) and vinaigrettes in place of traditional French sauces made by deglazing cooking juices with wine and then elaborating them with rich dairy products like butter and cream. Vegetables suddenly achieved a new importance in the context of this cooking style, too, and homelier cuts of meat, including a lot of organ meats, and less expensive fishes (mackerel, herring, red mullet, etc.) took pride of place on the menus at this new breed of bistro, which also dismissed the canon of traditional bistro cooking, including such grand Gallic dishes as blanquette de veau and boeuf bourguignon, as too rich and too heavy.

French food writer Sebastien Desmorand coined a name for the new movement, La Bistronomie, and a raft of new guides and publications, including Nova (no longer publishing) and Le Fooding (now partially owned by Michelin and so part of the establishment it once took such iconoclastic delight in ridiculing and rejecting) championed it. So it thrived, and to such a degree, in fact, that it’s now much easier to find a bistronomie style meal in Paris than it is a traditional bistro feed.

On my way to the restaurant on a cool autumn night, I remember the spectacular first meal I had at the original La Régalade. First we gorged ourselves on the superb loaf of terrine de campagne that arrived at the table with excellent bread compliments of the house, and then I had ravioli stuffed with foie gras under a thatch of truffle shavings and a sublime dish of grilled rougets with cep mushrooms and roasted chestnuts. This meal was so good that thinking about still makes me ravenous many years later. So I was very curious about how Clarke would reset the pendulum of this very famous place en route to meet Bruno there for dinner.

Arriving, the look of the dining room hadn’t changed in any perceptible way, which allowed me the pleasure of some umami-rich gnawing on old bones nostalgia for all of the excellent meals I’d eaten here through the years, with different people and on different occasions, over a glass of excellent Cotes du Roussillon Domaine Modat while I waited for Bruno. The crowd seemed little different from the last time I’d been here, perhaps five years, ago, as well, since it remained a mixture of locals, guidebook-following foreigners, French out-of-towners staying in inexpensive hotels around the Porte d’Orleans and solidly fed Parisian regulars of different stripes who’d probably arrived by Uber. There was, however, a sprinkling of younger types, who probably knew Clarke’s cooking from the days he was chef at Fish La Boissonnerie, a popular expat table in Saint-Germain-des-Pres.

So I found myself musing like some kind of an uncle on the idea of having known this restaurant for its entire lifetime and also wondering why I hadn’t been here in such a longtime. In the end, the reasons this address fell off my list had to do with the fact that bistronomie became so ubiquitous it no longer required a journey to an out-of-the-way corner of the 14th Arrondissement to enjoy or not enjoy it and also because as good as the cooking of chef Bruno Doucet may be–Doucet took this place over when Camdeborde moved to Saint-Germain-des-Pres to profitably play to his international reputation in a front-row setting where he could command higher prices, it lacked the sinewy originality and occasional thrillingly primal bluntness of Camdeborde’s style. All of this probably explains why Doucet decided to sell the restaurant to Clarke and concentrate on the two other Paris restaurants that bear the La Regalade name, La Régalade Saint-Honoré and La Regalade Conservatoire at the Hotel de Nell. Odds are good that he probably wants to make some money off of a good globally known brand name on his own count, too–and who can blame him, without having to worry about maintaining the allure of the original location.
When Bruno showed up we ordered right away, since he was hungry at the end of a long day. After the waiter left our table, I found myself earnestly hoping about what would happen next, and then it did. The help-yourself terrine de campagne brought to the table as a complimentary hors d’oeuvre arrived with a thump, and then there was second thump an earthenware jug of cornichons was set down on the table, along with a basket of excellent bread. And we shamelessly savaged the terrine, which was superb. Oh, and by the way–don’t even think about scolding the fat edging this terrine, since it was as delicious, maybe even more delicious, as good butter. Just for the record, maybe it’s Instagram fatigue or something, but I’ve also gone completely off super-styled food photography and am now besotted with photographs that tell the truth.

Since the kitchen was clearly struggling a bit to keep up with a full dining room just a couple of weeks after the takeover, we were also treated to a superb slice of one of the best rabbit terrines I’ve ever eaten. Clarke, 28, whose food I loved at Fish La Boissonnerie, has clearly mastered his basic Mrs. Beeton’s cooking skills, because these beautifully made terrines could as easily have been served in a Cotswold farmhouse as a restaurant in Paris. And in the interval between the terrines and the arrival of our first courses, I couldn’t help but think about what a hugely challenging thing a reset of La Régalade would actually be, since it’s such a monument of recent Parisian gastronomy. And yet…. And yet the thought does occur that bistronomie has become pretty rote after twenty-five years, so perhaps we’re eager for a delicious and well-reasoned change?

No sooner than I’d started mulling over this idea–what exactly might we be wanting when we sit down in a Paris bistro today?–then our starters came to the table. My carpaccio of smoked lamb with spinach leaves, pine nuts and Kalamata olives was excellent, as was Bruno’s marinated bonite with Granny Smith apples and roasted chestnuts. And then it struck me–maybe what we want is food that’s less chef-y and more about good eating? What made me think this is that these starters were intelligently conceived, well-sourced, frank and not intended to show off, or bear a showy chef’s signature, although they did–Ollie Clarke’s.

For all of his experience in Paris, I have a sneaking feeling that it’s not the French chefs he worked for who had the biggest impact on Ollie Clarke, but British seafood maestro Rick Stein, since Stein is a cook who glories in great produce and is fascinated by preparing traditional recipes with the subtlest of tweaks. What this means is food that’s delicious and modern but humble. Or food like Ollie Clarke’s.

Even if they both had a flaw or two, our main courses confirmed this perception of Clarke’s cooking as feet-on-the-ground, with the good bones of serious technique, plus a sensibly shy shot of imagination and a profound love of produce. My pork belly was described as croustillant, or crispy, on the menu, but wasn’t. Still, the taste was gently smoky and pleasantly porcine, and the garnishes of cabbage and carrots with a puree of boudin noir (blood pudding) were logical–the vegetables, and clever–the sauce. Bruno liked his veal breast with honey-glazed parsley root, too. When I return, however–and I will, I’ll order fish, because I’d be curious to see just how Rick Stein may still be Clarke’s compass in the kitchen, since Clarke began his career at Stein’s The Seafood Restaurant in Padstow, a pretty seaside town in Cornwall.

Clarke also had the good sense to maintain another much loved tradition at La Régalade, the individual Grand Marnier souffle, which was impeccably made and as much of a failsafe Gallic happy ending as can be imagined. Ditto a stunningly good baba au rhum, or sponge cake gorged with rum-spiked sugar syrup, a big quilt of vanilla-flecked whipped cream and the charming garnish of candied lemon verbena leaves.

This was a very very good meal, and the Paris table it made most think of wasn’t any of the bistronomie places in Paris today, but rather the restaurant Bones when Australian James Henry was the chef there. Clarke and Henry share a love of the art and hard work of good honest cooking made with excellent produce, and neither of them need to insert themselves into the story with fiddly garnishes or fussy plating like many other bistronomie chefs. So Ollie Clarke is off to a a terrific start, and La Régalade looks good to go for a new cycle of quiet culinary renown with him in the kitchen. 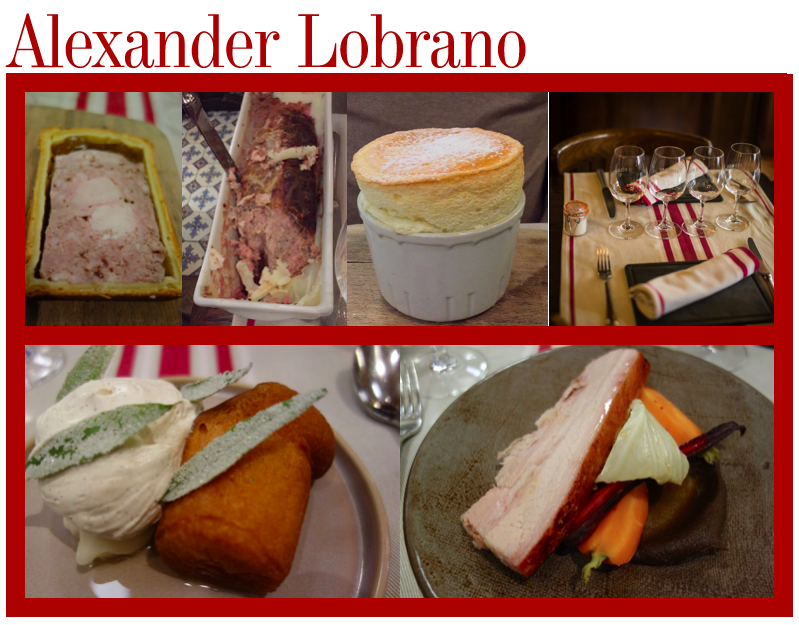